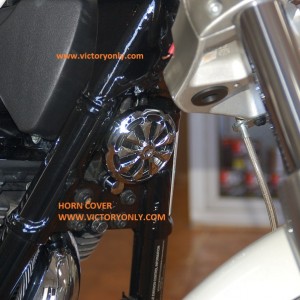 Victory Motorcycle Kuryakyn Custom Chrome Horn Cover Fits: All 04-14 Victory Vegas, Victory Kingpin, Victory Hammer, Victory Jackpot, Victory 8 Ball and Universal for 2004 to 2014 Models with horn mounted at neck between front down tubes Covers the Round Horn that we have wanted to cover up for a long time.

THIS IS A ROULETTE HORN COVER BY KURYAKYN AND VICTORY ONY. A chrome horn is just seconds away with this great looking cover Installs in seconds just snap on and tighten set screw but It fits so good the set screw just is an added security. Retains the sound and improves the look on horns mounted between the frame down tubes. Fits: All 04-13 Victory Vegas, Victory Kingpin, Victory Hammer, Victory Jackpot, Victory 8 Ball and Universal for 04-13 Models with horn mounted at neck between front down tubes Great gift because it fits all Victory bikes. Hard to find horn cover that looks soo good in an area that needs some chrome to break up the black area. Installs Easy using pressure and a set screw for the tightest fit. 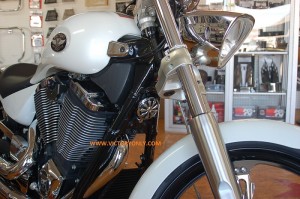 VICTORY ONLY MOTORCYCLE CHROME HORN COVER FITS ALL VICTORY MOTORCYCLES INCLUDING VEGAS, Victory Vegas 8 BALL, Victory Kingpin, Victory Hammer, Victory Jackpot, Victory Hammer 8 BALL, ARLEN NESS CUSTOMS, AND ALL VICTORY MOTORCYCLES WITHT HE ROUND HORN MOUNTED ON THE NECK AND LOWER TUBES. WE ALSO OFFER STAINLESS STEEL BOLTS THAT ARE UNDER THE NECK IN THE PICTURES ABOVE THAT SHOW THE RUST. VICTORY ONLY MOTORCYCLE PARTS AND ACCESSORIES ONLINE IS YOUR NUMBER ONE SOURCE FOR PARTS. WE SHIP WORLDWIDE AND DISTRIBUTE TO DEALERS IN US, UK, CANADA.